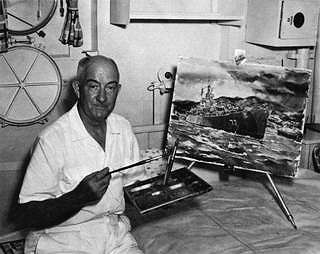 Arthur Beaumont taught at the Chouinard Art Institute in the 1920's. Best known for his watercolors of ships and harbor scenes.

Member: New York Water Color Club, American Watercolor Society, California Water Color Society. Arthur Beaumont grew up in England then immigrated to America via Canada when he was nineteen years old. He studied art with Stanton MacDonald-Wright in Los Angeles, William Russell Flint and Frank Brangwyn in London and jean-Paul Laurens in Paris. In the late 1920s, Arthur taught at the Chouinard Art Institute and operated a freelance commercial art business. In the 1930s, Beaumont became a Lieutenant in the United States Naval Reserve and began producing the first of many watercolors depicting battle ships and other naval subjects.

During World War 11, Arthur Beaumont was a war artist, documenting naval battles. A series of these works were published in National Geographic magazine. After the war Beaumont continued producing watercolors of naval activities in China, Japan, Guam, Vietnam and the Antarctic. Although Arthur painted depictions of landscape and figurative subjects and worked as a commissioned portrait artist, Beaumont is best known for his watercolors of ships and harbor scenes.

Throughout his career, he exhibited in California on a regular basis. His works were very popular, especially in the 1940s and 1950s, with articles about his works appearing in many newspapers and magazines. In 1989, a book titled Arthur Beaumont, Naval Artist, which documented his life and art, was published in conjunction with a retrospective exhibition at the Laguna Art Museum.