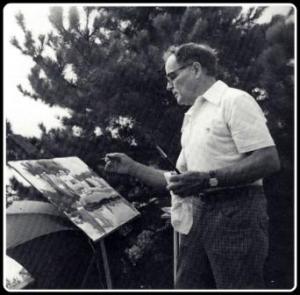 Hardie Gramatky was raised in Southern California. He studied art with E Tolles Chamberlin, Clarence Hinkle, Pruett Carter and Barse Miller. A dedicated student of watercolor painting, Gramatky produced an average of five small watercolors per day. By 1929, he had become a proficient watercolorist and was recognized as one of the true innovators in the development of California Style watercolor painting. These skills helped him to get a job as a senior animator at the Walt Disney Studios.

In the early 1930s, Hardie became active on the board of the California Water Color Society and it was largely through his aggressive moves that the California School of watercolorists was able to take control of the Society and expand it into a nationally recognized organization....