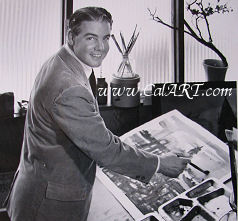 Noel Quinn was born on Christmas day and grew up in Rhode Island. After graduating from the Rhode Island School of Design in 1936, Quinn received a fellowship to do post graduate studies in France and Italy. He studied with Andre L'Hote, known as a key teacher in the Cubist art movement and with Andre Cassandre, a famous artist. He eventually went to work as an art director for the Paris division of the J. Walter Thompson Advertising Agency.

When World War II started, he moved to the Los Angeles area and began working in the motion picture industry. He produced pre-production art for many studios including Paramount, M.G.M. and Twentieth Century-Fox. In addition, he became a watercolor painting instuctor at the Otis Art Institute and worked as a freelance commercial illustrator.

Throughout his career, Noel Quinn painted and exhibited fine art watercolors. The style he worked in featured bold patterns, bright colors and were usually geometric abstractions based on cubist ideas. He sold work through galleries in Paris, New York and Los Angeles and exhibited nationally in annual art shows. In 1959, he toured the Pacific and Japan doing commissioned art works for the United States Air Force. In the years following, he produced a series of educational films on watercolor painting. He was president of the California Water Color Society in 1962 and president of the Society of Motion Picture Illustrators from 1963-1965.